Among the many festivals that takes place in India to celebrate diverse occasions is Ram Navami commemorated in the Hindu month of Chaitra that falls between April and March, to celebrate the birth of Rama. It is a hugely important festival for the Hindus as Rama is considered an incarnation of the god Vishnu. In some parts of India it is celebrated as Vasanta Navratri over nine days. 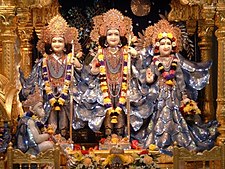 In households observing the festival the day begins with a prayer to the sun and at mid day, the supposed time of Rama’s birth, special prayers and poojas are performed in Ram temples big and small all over India. Some people start the festival with a fast and some others fast for the whole nine day duration to appease the god and to bring good luck upon them. Strict dietary guidelines are observed during the fast. At the end of the prayers, rituals and Bhajan singing, the officiating priest performs a peace chant and sprinkles consecrated water on the devotees and distributes sweets and fruits. Many people stay up the previous night in anticipation of the birth singing devotional songs and rock Rama images in cradles at the supposed time of his birth. The most popular part of Ram Navami is a procession in which people attired as Rama, his brother Laxmana, his wife Sita and Rama’s disciple Hanuman are taken in a gaily decorated chariot through town. The chariot is accompanied by people dressed as Rama’s followers and soldiers all singing and shouting the praises of Rama making the whole thing a lively affair. On this holy day Ram temples throughout India look festive in decorations and the images of Rama, Sita and Lakshmana are decked out in finery and devotees read selected chapters from the Ramayan.

Ayodhya where the birth is supposed to have happened and where Rama is said to have ruled is the centre of celebrations. A huge fair attended by thousands of devotees takes place to commemorate the event. In Pondicherry too the festival is celebrated with much devotion, observance of rituals and festivities.

Close to the city centre Hotel Atithi is a convenient place to stay with easy access to city attractions, shopping and dining areas. Its selection of well appointed guests rooms and suites are some of the most comfortable Pondicherry accommodation in addition to which a host of modern leisure and business facilities and amenities makes this Pondicherry hotel a good choice for both business and leisure travelers.