Jetwing Travels is a pioneer in providing convenient Sri Lanka travel facilities to ant part of the country. Personalized Sri Lanka tours can be organized according to your preference if you contact this travel provider. Sri Lanka is a country which is home to a diverse range of ethnicities. O the number of cultural festivals you would be able to witness while in the country is immense. 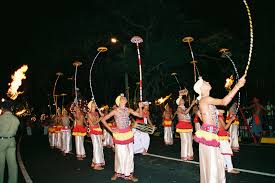 If you are visiting the island paradise of Sri Lanka during the month of June you would be able to witness a very important festivals to the Buddhists in the country; the Poson festival. The celebration is mainly centered on Mihinthale a city very close to the historic Anuradhapura kingdom. It is believed that Arahat Mihindu came from India on this day with the gift of Buddhism to all Sri Lankans. Many holy events based on the temples take place all over the country. Free food is given to people who go on pilgrimages or anyone who passes on the road. There are many replicas of the Mihinthale Mountain all over the country displaying the story of how Buddhism came to the country. This truly is a very soothing festival celebrated on the full moon day of June each year.

Sri Lanka is much more than a paradise of pristine beaches and diverse wildlife. The island has a rich historical and cultural heritage which is reflected in its distinctive festivals. A traveller seeking Sri Lanka tour packages can choose from the holiday packages Sri Lanka offered by Shanti Travel Sri Lanka which will help you experience local culture at its best. One of the island’s main Buddhist festivals, Poson is only second to the vibrant Wesak Festival. Poson celebrates the day on which Buddhism was introduced to Sri Lanka from India thus Buddhists participate with much honour, creating colourful lanterns. Cities all over the island shimmer with multi coloured lights embracing the festival spirit.

Thanuja Silva is a travel writer who writes under the pen name Auburn Silver. She has a passion for fashion and a deep interest in admiring new and exotic attractions around the world. Mihintale Rock by Jolle~commonswiki assumed (based on copyright claims). [GFDL or CC-BY-SA-3.0], via Wikimedia Commons

The Poson Festival natively referred to as Poson Poya in Sri Lanka celebrates the introduction of Buddhism to the country during the third century BC. It is a significant historical event to the country where majority of people practices Buddhism as their religion.

The Mihintale rock plays a significant role during the Poson Festival which is held during the month of June, since it is said that it was in Mihintale where King Devanampiyatissa of Sri Lanka was converted to Buddhism by the Arahat Mahinda who came from India. With this legend Mihintale has become the main site for festive activities during Poson and many locals and foreigners visit Mihintale during this season to perform religious rites as well as for leisure.

There are many religious activities organized during the period of Poson including Sil Campaigns and Bodhi Poojas in temples in which only Buddhists participate. Dansal which are set up with the aim of giving away food and beverage to people sees the participation of all religious and ethnic groups.

Generally a Dansala is organized by a group of people or an individual and various food such as rice and curry, sandwiches, boiled chickpeas as well as tea, coffee and fruit juices are served to those who visit the Dansala free of charge as a charitable act.

There are several other rituals that come with Poson. Devotional songs are sung by Buddhists in every nook and corner while Poson Pandols which are colourfully lit illustrations from the 550 Jataka Katha or the 550 past life stories of the Lord Buddha can also be seen in plenty in every city of the country. These pandols are veritable sights glistening at night and many people from around the country come to see them in the late evening till past midnight.

Sri Lanka is a country that is rich in tradition and culture; you will find that the people are hospitable and easy to talk to. There is much to see in this beautiful island and the mouthwatering local cuisines must be tasted if you make a visit to the country.

Travelling in the country is quite safe and you will find Sri Lanka car rental services such as the Malkey rent a car that offers vehicles that are comfortable and in good condition to travel to any part of the country. You will be able to hire a vehicle for airport transfers Sri Lanka as well but make sure you go to a reliable source since you wouldn’t want to miss your flight!