Kandy is one of the highly visited holiday destinations in Sri Lanka and you can see tourists out and about on most days of the year, but during the perahera season, literally, every Buddhist from all over Sri Lanka and the world come to Kandy, especially to the Dalada Maligawa.

When does it happen?

The Esala full moon falls during the first week of July and the Perahera will begin on the last weekend of July and end ten days after. Getting in touch with a few local travel firms, for example, the Connaissance de Ceylan will help you plan your trip in perfection.

The sole motive of this full moon festival is to get the blessings from the deities, for a good harvest in the year ahead. Carrying the tooth relic of Buddha, 10 days of ancient rituals, royally decorated elephants, drummers, and dancers create a breathtaking procession that begins on the streets of Kandy.

The Esala Perahera includes five Peraheras; five processions from Kandy leave to the Dalada Maligawa, Natha, Lord Vishnu and Katharagama respectively. Lord Vishnu, the Hindu god, is considered to be the Guardian of Sri Lanka and the Hindu goddess of chastity, Pathini, gets the fourth and fifth Perahera, for being the goddess who blesses wars and victories.

Catalina Forbes is a travel writer who bases her content on many thrilling escapades experienced across the world.

One of the most popular holiday destinations in Asia is Sri Lanka. Travel to Sri Lanka and enjoy the diverse range of attractions and activities that it offers. While visiting the country the least issue that you would come across is traveling. Jetwing Travels is a professional organization which offers Sri Lanka tours accordingly to suit your personal wants and needs. 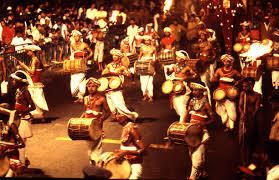 Apart from the natural and historical attractions Sri Lanka has some unique cultural events that equally amaze both the locals and foreigners. One such spectacular festival is the Kandy Esala Perahera which takes place during the month of August. Even though this is a Buddhist festival, the number of non-Buddhists from around the world gathers in the city of Kandy to witness this colourful event. This festival had been celebrated from ancient times and still has not lost its glamour and class. The main item in this parade is the Tooth Relic which is taken around the city on a tusker with great respect. Apart from this there are many dancers, whip crackers, stilt walkers, a huge number of elephants, fire dancers and much more. This is held during the night time which makes the parade more enchanting and beautiful. Light is provided in a traditional way by people who carry lanterns which have “coppara” burning. The aroma of these coppara and the smell of burning kerosene oil can be felt miles ahead. Many street vendors can be found selling various food items, trinkets and toys making the experience more Sri Lankan and unique. Make sure you make an early reservation in one of the many places that offer seating facilities to avoid getting squashed amidst of a sea of people.